Siblings Ron Ford and Elizabeth Ford were recognized with the Essence of Humanity Award at this year’s Martin Luther King, Jr. Breakfast Experience benefitting Crispus Attucks Community Center in downtown Lancaster. Both Ron and Elizabeth grew up in Lancaster. Ron is a former Lancaster County Commissioner with a political career spanning from 1975 to 2003, and his involvement in the community continues today. Elizabeth retired in 2009 as an Early Care and Education Director for First 5 Alameda County in San Leandra, California, before returning to Lancaster in 2010. She has been the organizing force behind the 7th Ward Oral History Project, an effort to capture the vibrancy of the community in which she grew to maturity. 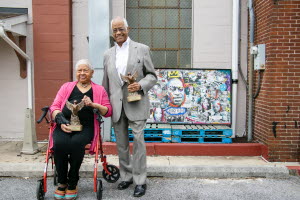